Ramblin Worker, a “DRAW Show” contributor and Gallery Three artist, has just packaged up some neat messenger bags for our enjoyment. With Bicycle Film Festival 2009 just around the bend (May 29-30), these pouches will serve useful to many a messenger.

END_OF_DOCUMENT_TOKEN_TO_BE_REPLACED

Ron English never sleeps- or so we deduce by incessant media coverage of his infinite projects. This March he teamed up with Bigfoot and Jason Maloney in New Jersey to bomb the Hudson County Art Supply, resulting in a mural that flows smoothly while also staying true to each artists’ common imagery (more at Juxtapoz). Hurley produced this video documenting the project: 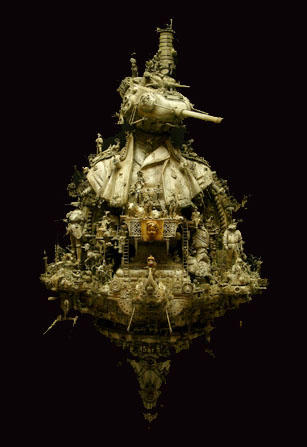 This weekend, Kris Kuksi and Andrew Jones are heading north for the opening of “Divine Invasion” at Toronto’s Meta Gallery. Considering the success of Kris’ last show, “Imminent Utopia,” we are excited to see where his new works take us.

Meta’s press release made us think twice about Kris’ work:

The viewer is just as much a part of the artwork as the characters that inhabit the landscape of this truly bizarre and unearthly realm . . . Various characters appear throughout – soldiers in this emerging paradigm, and evidence within Kris’ works that a greater story is being told.